Kate Gilmore’s Girl Fight offers an overview of the artist’s work extending back to 2004, and culminating in a new sculptural installation and accompanying videotaped performance made at
Artpace. Unfolding throughout the building, the exhibition is a comprehensive presentation of the artist’s process, showing the range of her thematic territory and her devotion to colorful composition.

The show opens with Blue Ribbon (2007), screened on the monitor in the stairwell lobby. It features the artist stacking bales of hay while wearing a delic 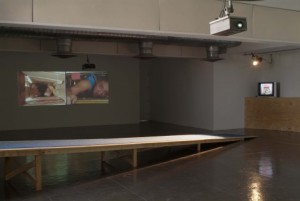 ate sundress, blue hair ribbon, and what Gilmore has termed “cute farmer heels.” After completing each layer of this makeshift pyramid, she climbs the bales, tying around them a blue ribbon analogous to the one in her hair, constantly on the verge of losing her balance and falling. The work underscores the artist’s unyielding atte
ntion to compositional perfection even in uncomfortable circumstances, a recurring theme in Gilmore’s work, which draws attention to the obsessive behavior that can emerge while coping with daily toil.

In the conference room is a program of two shorter video works: Baby, Belong to Me (2006/2007) and Before Going Under (2007). Both are set to popular music, lending them the familiarity of a music video. In Baby, Belong to Me, Gilmore’s noosed, slipper-clad foot fills the frame against a background of painted hearts while one hand struggles to untie the rope. Set to a song from the 1980 musical Fame, the video portrays the conflict between the longing for personal success and the need to give attention to love and relationships. In Before Going Under, we see Gilmore, dressed in a white skirt and red top, holding a bouquet while someone off-screen tries to lasso her with a yellow rope. Once caught, Gilmore springs into action, running out of the frame, the rope taut as she struggles against the violent pull of her captor until she is brought down and dragged across the ground, once more passing out of view, this time presumably into the clutches of the love that has conquered her.

Endurance Makes Gold (2008), created at Artpace, returns to a recurring theme in the artist’s work—the desire for reward in the wake of personal success—and is Gilmore’s most ambitious project to date. The sculptural elements begin in the courtyard, one full story below the exhibition space, and extend through the north-facing gallery windows into the center of the Hudson (Show)Room. The video of the performance, presented at the bottom of the installation’s carpeted ramp, depicts the artist struggling to climb the sculpted tower of discarded furniture and platforms before clambering through the gallery’s window and strutting down the ramp. To make this compositionally complex video, Gilmore used three separate cameras and spliced the moments together to form a single narrative. She combined yellow, red, and blue both in her outfit and in the structural components of the sculpture, referring to the ribbon colors for first, second, and third place finishes. The somewhat makeshift quality of the installation and its performance video attest to the artist’s willingness to leave certain features of her work to chance, including shooting the performance in one single take and then editing it into the best narrative attainable. This “found” approach to the creative process is reflected in the title of the work, which she discovered in a fortune cookie during a meal in San Antonio.

In the alcove adjacent to Endurance Makes Gold is another program of two short works that also deal with the aspiration to fame and celebrity. In With Open Arms (2005), Gilmore, clad in a lavender cocktail dress and matching hair bow, is a performer taking her curtsy in front of a background decorated with stars as she is pelted with tomatoes, all the while struggling to maintain her dignity and composure. In Star Bright, Star Might (2007), the artist is like a child at a carnival, inserting her face into a cut-out in a false-front set that turns her into star, until her repeated attempts to correct the fit results in her destruction of the set.

Finally, the exhibition includes two more works, projected on a larger scale–My Love is an Anchor (2004) and Main Squeeze (2006)–that exemplify Gilmore’s earlier forays into navigating difficult situations. They are relentlessly physical and dark in character, and in My Love is an Anchor, in contrast to other similar works, we never find out whether the outcome is successful or not. We are left instead with a protracted study of persistence and futility.

Organized on the occasion of the American Crafts Council’s annual conference, this exhibition, is presented at Globe Dye Works from October 12 – November 09, 2019.   It bings together more than forty works in fiber, metal, clay, wood and glass by as many artists all of whom worked or continue working in the Philadelphia… 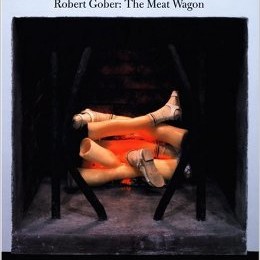