Marie Lorenz’s project at Artpace, Narrative/Memory/Navigation, has given her the first opportunity to integrate her divergent practices into a single installation, albeit one with contrasting elements culled from different histories of travel. At its core is her exploration of the San Antonio River, an economically important tourist destination that is as readily identified with the city as the Alamo. During her initial site visit this past March, her attempt to plot the source, path, and termination of the waterway exposed the incompatibility of maps, guides, and other official documents that record where the river flowed and when. Aerial surveys showed that many stretches of the river, marked as waterways on maps, were in fact bone-dry gulches overgrown with weeds and refuse.

However, after near record rainfall in the region, Lorenz’s four-day voyage down the San Antonio River blossomed into a journey interrupted only occasionally by the need for an overland portage. Her plywood boat originally was to have been sheathed in a polyurethane-coated vinyl, but the craft Lorenz ultimately built and piloted had only a makeshift skin made of sheet plastic and tape. Displayed in the exhibition as a relic, the boat carried Lorenz to parts of the river not normally considered navigable and thus allowed her, armed with official permits (and not), to row both through the developed Riverwalk area—normally restricted to officially sanctioned commercial traffic—and to areas due south of the King William area not thought of as navigable at any time of the year.

Prior to this voyage, Lorenz began working on a series of five woodblock carvings (installed at the center of the gallery), each depicting a moment from the journal of an explorer: Robert Juet, Henry Hudson’s first mate on his 1609 excursion up New York’s Hudson River; Donald Crowhurst, who disappeared at sea, a presumed suicide, after attempting to fake a circumnavigation of the earth in 1969; William Clark, who accompanied Meriwether Lewis on their famous expedition to the Pacific coast of the United States; Thor Heyerdahl, renowned Norwegian explorer and archaeologist, whose 1947 voyage aboard the balsawood raft, Kon-Tiki, proved that ancient South American cultures could have sailed to and populated the South Pacific; and finally Lorenz herself, captain of the Tide and Current Taxi, explorer of urban waterways. Like illustrations in an adventure novel, the imagery in each carving is accompanied by a captioned phrase from the explorer’s journal, recounting the scene depicted. Concurrent with her river voyage, Lorenz made a series of rubbings from these carvings, manipulating the paper and recomposing information from different blocks onto a single sheet. These composite drawings, which fill the walls of the installation, no longer represent their original contexts, but have been transformed into illustrations of the artist’s own exploration of the San Antonio River.

Thus, viewers are confronted with renderings of the artist at the water’s edge, radio towers, dams, electrical towers, boat hulls, decaying carcasses, and other disparate images from both her journey and those of her historical fellow travelers. None of them translate into a coherent account of any one moment in her voyage. Rather, like memory, incidents from the adventure, both real and imagined, recur and blend together across different compositions. Here, as in the journals of the explorers Lorenz emulates, documentary fact and embellishment for the sake of posterity turn otherwise mundane incidents into adventuresome discovery. 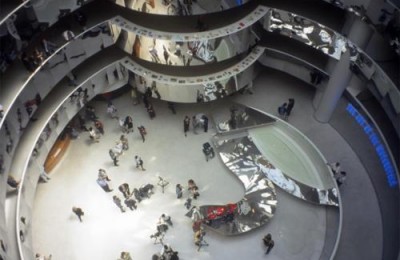